The first scene program has come and gone, and now that my family has all done the same, I have some time to sit and write about it all. It’s a Barber night tonight, so I’ve been home all evening, enjoying the time and space to putz around and procrastinate writing the many blog entries I have backlogged!

All in all, I am very happy with the end result of the “Lucia experiment.” It feels like a great fit vocally and dramatically, and I’ve had several of my coaches here say that I will end up in this rep (and this role) in a few years. For now, it’s a little big, but it’s a great role to put on my “Five Year Plan.” I can start looking at it now, learning the first act aria, then the duets, and then s-l-o-w-l-y start working on the mad scene. I shouldn’t offer the aria (“Regnava nel silenzio”) at auditions for a year or two, but I can work on the role on my own and with coaches, “just for fun.”

What I think I loved best about this scene program, though, was that it was a showcase for all the Apprentices at Santa Fe Opera. I don’t think I’ve mentioned anything about the army of technical apprentices that keep things running here. For all the technical areas of the opera – stage management, costumes, wigs and makeup, lighting, audio/visual (think monitors, not miking: although we are miked for Ainadmar, that’s a special circumstance), sets and scenery – there are dozens of college students who indenture themselves for the summer! Seriously, they are some of the hardest working people I’ve met. Imagine having about five weeks to get two large operas up and running, and then two weeks after that having another opening every week for three weeks. That’s a lot of sewing, building, painting, and light focusing. Here’s the understatement of the summer, from the description of the Tech Apprentice program: “The production of The Santa Fe Opera season is rigorous, personally and professionally demanding and physically taxing.” Ha! These kids easily work 12-16 hour days six days a week, all summer. It’s amazing.

They get their chances to shine, though, in the scenes. The costumes, sets, lights, and stage management are all orchestrated and operated by the tech apprentices. My costumers were both undergraduates, 20- and 21-years-old, who have spent the summer hiding behind sewing machines. Can you imagine what it must be like to have the costume vault of the Santa Fe Opera at your fingertips at that age?! Emily was the designer for my scene, which meant she worked together with the director (Thaddeus Strassberger, the assistant director for Peter Grimes) to put together a “look” for the entire scene (six singers and about a dozen supers). Lucia di Lammermoor is based on a Sir Walter Scott novel, so the overall feel of the scene was to be very gothic.

The idea for my dress? Something you might have found on the Paris couture runways circa 1985, and not at all unlike what we saw this year at the Christian Dior show. (Is anyone else sensing a Galliano theme? Eeee!) Emily and Thad imagined that Lucia put up a real fight when they tried to get her into her wedding dress, so it got torn and dirty. You can tell that there’s a really beautiful dress there, but some things are just not quite right… I couldn’t believe my eyes when I had my first fitting: layers and layers of lace and ruffles and velvet and a corset to die for. And it only got better with each additional fitting. By show time, we had this: 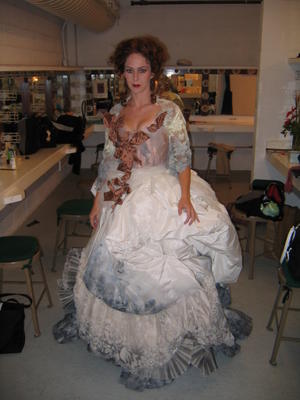 Yowza!! What a dress. (And I NEVER thought I’d, um, look like that in a corset!) It was amazing. And heavy and a bit unwieldy, but I loved it. I’m also loving that hair color; I think I might go for a darker red when I get home. 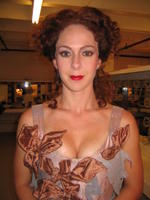 Oh, yeah, and I sang a little bit, too… I learned many lessons about bel canto singing that I’m now in the process of applying to my other rep (Norina, Adina, even Zerlina). My biggest hurdle was the sustained D at the end of the scene, but I feel like I managed it pretty well. I was very happy with the sustained D-flat at the end of the sextet, but what a difference a half step makes! A stagecraft lesson I learned was that I can’t get into my acting as physically when I’m singing as I can when I’m just acting. My breathing got a little high (in my shoulders rather than my ribs) as I threw myself around the stage. (In the performance, it only looked like the tenor was doing the throwing. In the dress rehearsal? He really did. Not fun!) Something to work on in the future, and I know I will have a future with this role. Stay tuned…

I actually talked about why I LEFT costuming opera - its those 12-14 hour days that don't stop when the apprenticeship is over - its CONSTANT.
There is this wierd hierarchy in the technical theater world where costumers are on the lowest rung. But yeah, that apprenticeship is like every job I had for 16 years - its easy when you're in your 20's...
Is Lewis Brown still at Santa Fe? Or Marty Pakledinaz? They are both costume designers who were around when I was.

At Wolf Trap we only had directing, stage managing, and coaching apprentices, and they were pretty nice to us. Although I volunteered for a couple of marathons, we mostly only put in 10-12 hour days. Santa Fe is a different atmosphere entirely and is a great training program for artists on the verge!

I’d love to talk to you about Lucia! A friend of mine who has been singing Donna Anna, Nedda, and even the Four Last Songs is looking at Lucia now. Seems a little unusual to me, especially considering the colleagues I have who usually sing that role -like Anna Christy. I’d love to hear what you think of it.

How great that you recognize the work of the technical apprentices! When I was one, that was certainly not the case. Too often artists look past the people that are behind the scenes. But they are there for you, to support your role. Sounds attitudes have started to change. Good for you!

Sarah, we've got to get together!! I don't guess you go to NYC for audition season, do you? I have two trips to the city planned in the next few months; maybe we can meet up if you're in town. If not, I think I'll be in Atlanta in November. A visit home, maybe? God, it'll be so good to see you.

Anon, I spent a LOT of time backstage in my college years. I worked on lighting and costume crews, as well as working as a stage and house mangager. Oh, and I've worked in ticket offices, too! I feel like I've seen glimpses of just about every phase of life in the theatre. I definitely think more performers should "do time" in the technical fields, so we can always remember how many people it takes to get us on stage!

I'll be in NYC for fun during the week of October 3, but I'll come back to hear the YCA competition whenever they are. No plans to go to Atlanta, but NYC is close to DC. Email me (sincityopera {at} hotmail {dot} come) when you have a chance so we can work out details.

ACB
New York City, NY
Two opera singers and a baby walk into a bar... or maybe it was an airport... or a rehearsal hall. In any case, this is their story.